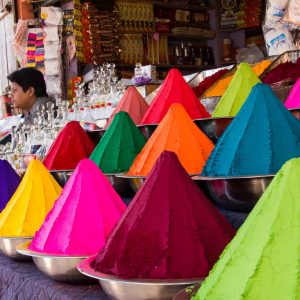 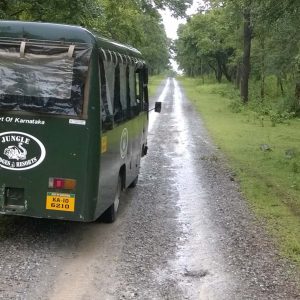 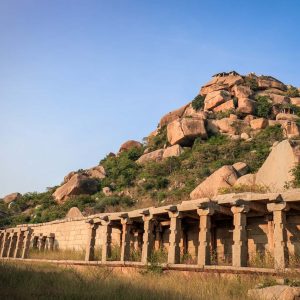 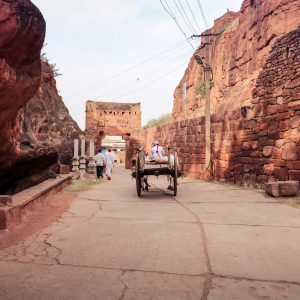 Day 01: Arrive at Hyderabad
On arriving at Hyderabad, you will meet our rep and be escorted to the hotel (30 minutes).
The Old City of Hyderabad is everything you might dream an Indian old city to be – narrow lanes thronged with markets, chai shops, wandering animals, auto rickshaws, a whirl of noise, colors, languages, and religions dotted with stately old architecture in varying states of repair. Two unbelievably wealthy Muslim royal houses, the Qutb Shahs and the Asaf Jahs, came and went through this city of pearls and diamonds, leaving a legacy of magnificent palaces, mosques, and tombs behind.
Overnight stay will be at Hyderabad.

Day 02: Hyderabad
You will visit the Golconda Fort. Once famed for its diamond mines, Golconda is the site of a strategic fort dating back to the 13th century. You will also visit Charminar – the city’s landmark that has four minarets built in the 16th century. Salr Jung Museum houses an extraordinary collection including rare fine art objects of the Nizam, once the wealthiest man in the world.
In the evening, you will explore the local market by foot.
Overnight stay will be at Hyderabad.

Day 03: Hyderabad/Bidar/Gulbarga
In the morning, you will drive to Bidar (140 km; 3 hrs). Bidder’s Fort, the palaces in ruins, the magnificent tombs, and the monuments are worth a visit. You will later drive to Gulbarga (110 km, 2 hrs).
Overnight stay will be at Gulbarga.

Day 04: Gulbarga/Bijapur
On this day, you will indulge in morning sightseeing in Gulbarga.
This city holds history in the era of 6th century and considered as the first capital of Bahamani Kingdom. Tourists attractions in Gulbarga are Bhamani fort and Khwaja Bande Nawaz Dargah. It also has a religious history justified with the elaborate temples over here.
You will later drive to Bijapur (150 km, 3 hrs).
Nestling in the northern part of Karnataka, Bijapur is a historically important city of the state. It was once the celebrated capital of Adil Shah dynasty. The city was established by the Chalukyas and named as Vijayapura. Soon it came under the rule of Bahmini Sultanate and was named Bijapur. Under this dynasty, a lot of monuments were partially destroyed during the wars, but the uniqueness of the monuments is still not hidden and attracts all enthusiastic travelers.
Overnight stay will be at Bijapur.

Day 05: Bijapur/Badami
Your morning visit will be to the Gol Gumbaz.
Gol Gumbaz is the tomb of Mohammad Adil Shah and is the second largest tomb in the world, next only to St. Peter’s Basilica in Rome. Gol Gumbaz is 124 m in diameter. The structure of the tomb is unique and the four minars of the corners serve as staircases to the top of the tomb. Gol Gumbaz is most famous for the “Whispering Gallery.” The gallery is a circular balcony on the periphery of the dome, where even the tiniest of sounds can be heard at the other side of the room. It is said that a sound gets echoed nine times in the room before beginning to fade away.
You will later drive to Badami (130 km; 2.5 hrs).
Badami, located in the Bagalkot district of North Karnataka, was the capital of the Chalukya dynasty. It is situated at the mouth of a beautiful ravine, flanked on either sides by beautiful sandstone hills.
Your evening visit will be to the Badami Caves. The cave temples are marvelous examples of the Badami Chalukya architecture. The temples are located between a ravine surrounded by huge cliffs. The architecture is a fine cross between north and south India.
Overnight stay will be at Badami.

Day 06: Badami/Hospet
During your morning drive to Hospet (165 km), you will en route visit Aihole and Pattadackal.
Aihole, a temple city, is famous as the “Cradle of Indian Temple Architecture.”
It has over 125 temples, all intricately carved and rich in detail. The oldest temple here is perhaps the 5th century Lad Khan Temple.
Pattadackal, is a World Heritage Site of early Chalukyan architecture. These temples are built in the 7th and 8th centuries.
Hospet is the gateway town to the Hampi ruins.
Overnight stay will be at Hospet.

Day 07: Hospet/Hampi/Hospet
After breakfast, you will proceed for a full tour of Hampi (18 km).
The splendid remains of the magnificent palaces, gateways, and creativity of architects silently narrate the story of the prosperous kingdom of the 14th century, and the destruction it was inflicted with by the Moghuls. Nestled between granite ridges and with the Tungabhadra River flowing in full force on one side, Hampi, the erstwhile capital of the Vijayanagara Empire, has now been listed as a UNESCO World Heritage Site.
Although in ruins today, this capital city once boasted of riches known far beyond the shores of India. The ruins of Hampi of the 14th century lie scattered in about 26 sq. km area, amidst giant boulders and vegetation. Protected by the tempestuous river Tungabhadra in the north and rocky granite ridges on the other three sides, the ruins silently narrate the story of grandeur splendor and fabulous wealth.
Overnight stay will be at Hospet.

Day 08: Hospet/Chickmagalur
Your morning drive will be to Chickmagalur (290 km; 6 hrs), famous for its coffee plantations and picturesque landscapes.
Overnight stay will be at Chickmagalur.

Day 09: Chickmagalur/Kabini
In the morning, you will proceed to visit the two famous Hoysala temples at Belur and Halebid. The temple in Belur is dedicated to Lord Chennakesava, whose construction commenced in 1116 AD and took 103 years to complete. The Hoysaleswara temple in Halebid has two shrines dedicated to Lord Shiva – Hoysaleswara and Shanteleswara. The open air museum in the temple premises displays treasured articles of sculpture.
You will later drive to Kabini (210 km; 5 hrs).
The legend and romance of Kabini plays out in a theatre called Nagarhole and revolves around a pristine river called Kabini (originally Kapila), which snakes its way through the Nagarhole National Park in Karnataka and forms an aqueous boundary with the Bandipur National park. Together, this area constitutes the largest contiguous forest cover in this part of the world and is a part of the Nilgiri biosphere, the largest in Asia, and home to the largest concentration of herbivores in Asia. And herbivores don’t get larger than the Asiatic elephants, whose favorite playground is this. At Nagarhole, one can witness the largest congregation of Asiatic elephants in the world, and these majestic mammals rule the roost here.
Overnight stay will be at Kabini.

Day 10: Kabini
Early morning, you will proceed for a Jungle Safari. During the safari, which lasts for two hours, the visitors get a good opportunity to see the herbivores. Sightings of the predators are less frequent, but improve considerably during the summer.
Overnight stay will be at Kabini.

Day 11: Kabini/Mysore
Morning drive to Mysore (90 km; 2.5 hrs)
Mysore, once the capital of the Wodeyar kingdom, is today the second largest city in Karnataka and one of the finest in southern India. Small, easygoing, famous for its silks and sandalwood, it is a city of fine gardens, tree-lined boulevards, art galleries, and an intriguing palace. Mysore’s 10-day Dessara festival in September-October is still celebrated with medieval pageantry.
Afternoon visit will be to Maharaja’s Palace, built in 1911–1912. The palace harmoniously synthesizes the Hindu and Saracenic styles of architecture, with archways, domes, turrets, colonnades, and sculptures, which are truly magnificent. After a visit at the Art Gallery, you will later drive up to the 1062-m high Chamundi hill to see the Chamundeshwari Temple with a panoramic view of Mysore. On your way back, you will see the 5-m high Nandi Bull carved out of solid rock in 1659.
The evening visit will be to the Devaraja fruit and vegetable market. For a visitor of this city, Devaraja Market is an apt place to get a flavor of the local people’s. With more than 100 years of history, this market is well knitted into the heritage of Mysore. If you are new to the bazaars of India in general, do not miss Devaraja Market. It is a good sample of a traditional Indian marketplace that is colorful, noisy, vibrant, and a tad chaotic.
Overnight stay will be at Mysore.

Day 12: Mysore
Before breakfast, you will proceed for a heritage walk with a guide, who will explain the history and heritage of Mysore. Heritage walk commences from Mysore City Town Hall, will continue to the Clock Tower, Palace North Gate and K.R. Circle, R. Hospital, and end back at the Town Hall. You will also stop at a small vegetarian hotel to taste Masala Dosa followed by tea.
In the morning, you will visit Somnathpur. The Keshava Temple stands at the edge of the tranquil village of Somnathpur – 33 km east of Mysore. Built in 1268 during the heyday of the Hoysala kings, it’s an astonishingly beautiful, unspoilt building. The walls of this star-shaped temple are covered with superb sculptures in stone, depicting various scenes from the Ramayana and Mahabharata, Bhagavad Gita, and the life and times of the Hoysala Kings.
Overnight stay will be at Mysore.

Sritangapattanam has the ruins of Hyder Ali and Tipu Sultan’s capital, from which they ruled much of southern India during the 18th century. In 1799, the British finally conquered them with the help of disgruntled local leaders. Srirangapatnam was built on a long island in the Cauvery River. The dungeon where Tipu held a number of British officers has been preserved. Inside the fortress walls, there’s a mosque and the Sri Ranganathsway Temple.

You will later drive to Bangalore (140 km; 3.5 hrs).
Overnight stay will be at Bangalore.

Day 14: Departure Bangalore
You will in time be dropped to Bangalore airport (45 minutes) to get a flight back home.